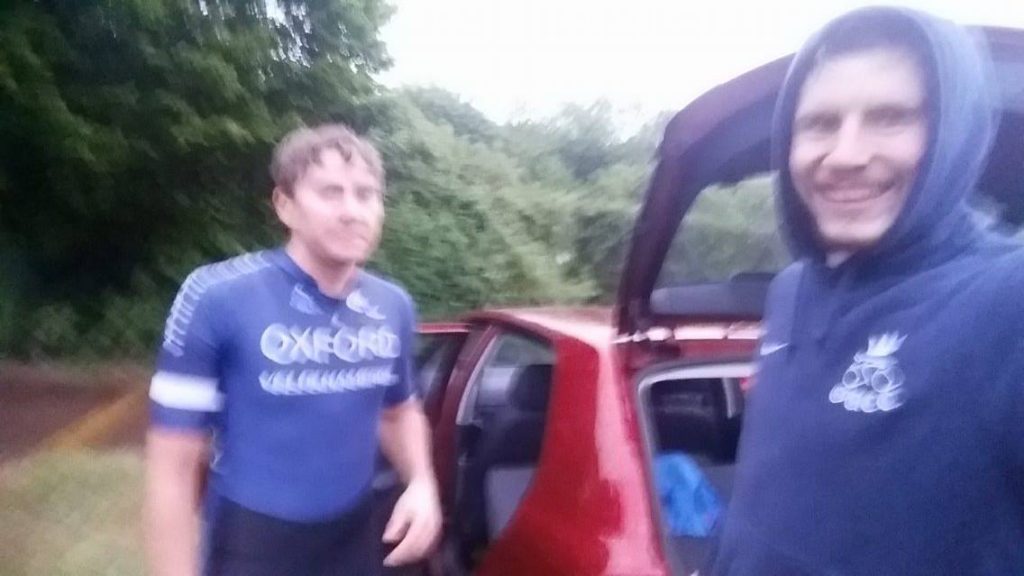 Apologies for the poor photo – it’s a good representation of how badly we were shaking from the cold.

Sitting in a General Relativity tutorial is not how most race reports start but it wasn’t until getting out at 4 o’clock that I noticed the email from Angus. It read something like ‘space in my car to go to a MK Bowl Crit…leaving at 17:00…come on Josh, good training to hang on in the next RR’. Clearly this was an affront to my cycling prowess (or lack thereof after a poor race last weekend). With one hour’s notice I had to go.

With the rain falling persistently we drove through the rush hour traffic to the Milton Keynes Bowl. Now for the small percentage of those who don’t know the MK course it is a kidney bean shape with an uphill sprint to the finish. This is important to remember, there is only one uphill section in each lap.

Angus would be in the E/1/2 race and myself in the 3/4. With just enough time to have one quick spin round the course the races were set off at 19:00. The conditions caused visibility to deteriorate very rapidly and after only one lap in everything looked the same hazy shade of brown. The E/1/2 riders lapped the 3/4 race on a few occasions which caused some confusion amongst the bunch however there were fortunately no crashes.

As the laps went by I started to get into a good rhythm – down, uphill, down, a couple of turns, uphill. That’s the lap right? Two hills with the finish at the second? In my defence everything looks the same at MK. As the race neared its end after an hour it was time to devise tactics for the final lap; move up on the first uphill section then go hard and sprint for the finish on the second uphill. A solid plan no doubt but for one thing…there is only one uphill section in each lap. By the time I realised my error I was too far back to contest the sprint. I had spent the entire race not knowing where the finish was and suffered for it.

Angus in the meantime was having a solid race, a race in which a solo break would eventually take the win with a normalized power of 375W for the hour. All this despite the weather being far from ‘Angus conditions’. Angus finished with the bunch but was beaten to a top 10 in the sprint, if only there were more hills on the course.

As ever there was plenty to take away from the racing especially knowing where the finish. Even the pros get this wrong sometimes (see Luka Pibernik on the Giro stage 5). Freezing cold, incredibly damp but quite happy we made our way back to Oxford to complete an enjoyable evening of racing.