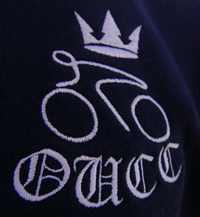 OUCC took on the notoriously hilly Banbury Star RR on Sunday 24th of May, featuring 3 ascents of the 11% average Edge Hill. The team lineup was Ben de Jager, Tom Bolton and James Lambton, who were racing with the aim of making the select front group for the finish.

On the first lap, the three stayed well positioned, and survived the first ascent. There was little respite however, as Equipe Velo set an infernal pace throughout, clocking above 40kph average. The bunch stayed together but was considerably softened up. On the second lap, things began to break up. The three OUCC riders found themselves too far back on the run-in to the ascent, but bridged over to a front group of around 30 riders easily. On the approach to the finish of lap 2, Ben dropped his chain, but was able to get back onto a chase group led by Tom Kirk and OTCC, and as a combined force they rejoined the front group after a 10km chase.

On the final ascent, the front group shattered, leaving a small select bunch with Ben and Tom 5s behind at the summit but well ahead of the bunch. A chase containing those two formed and pegged back the front group with 3km to go. At this point, Ben suffered another mechanical and had to abandon the race. Tom positioned himself well in the front group despite being isolated and took 11th in the sprint behind eventual winner Luke Souter, who had soloed away on the final lap. James finished with the first grupetto.

Lessons learned: 1) Climbing Edge Hill in the rain sucks (particularly if you are fat like Ben) 2) Always adjust your derailleurs properly 3) Jakub is a hero for towing everyone to the race HQ from Oxford

All in all, whilst no points were obtained, this was a positive day for OUCC who can be assured of the form and commitment to the team of the three riders, who worked very well together. Bring on Cuppers!