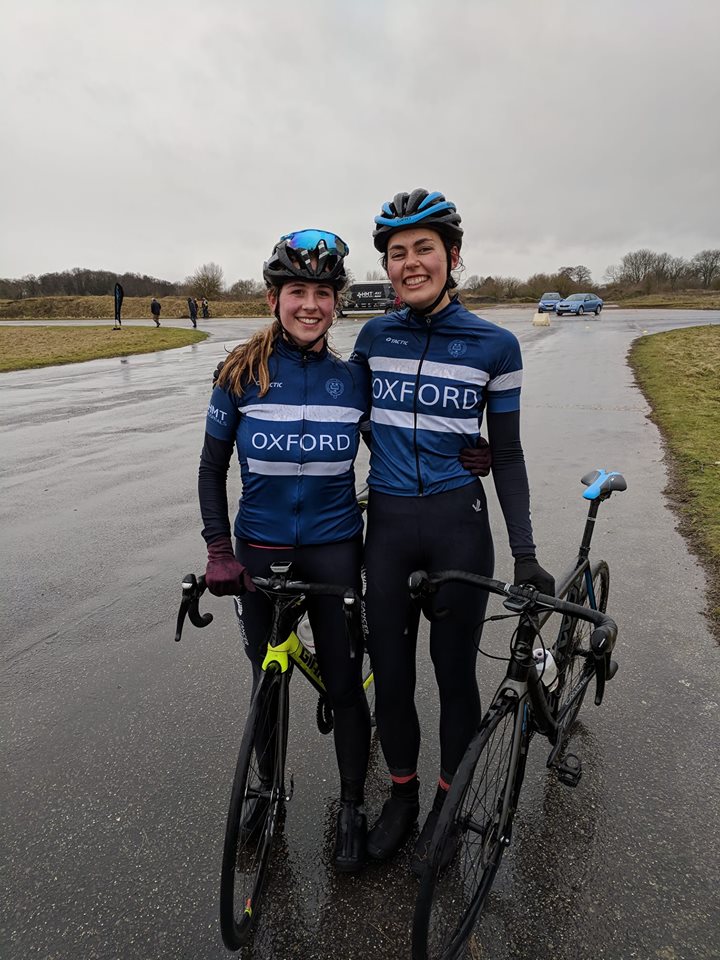 The second round of the Abingdon Race Team Winter Series at Dalton Barracks featured some classic British winter racing weather. Nevertheless, the freezing wind and rain didn’t damped the spirits of the riders in dark blue.

In the women’s race several breaks were established and then failed before, at about half distance, Issy Dodds decided to make her move. A pair of other riders appeared to have bridged across to her, only to be firmly dropped in the crosswinds. Issy proceeded to ride solo for the remainder of the race, settling into an imperious rhythm to finish over 1 minute 20 seconds clear of the field. An incredible performance in the conditions, made even more so by the fact this was the first time Issy, who has made the move over from rowing this year, has finished a bike race (after puncturing in round 1 of the series).

In the bunch spring behind Issy, Mimi Harrison demonstrated her ever-growing sprinting prowess to take 3rd place. Becca te Water-Naude had also been looking strong and done a good job of covering all the moves while her team mate was up the road. An unfortunate puncture in the final minutes ended her race prematurely.

In the men’s 3rd category race, the stiff crosswinds made for an aggressive race. After a seemingly endless series of attacks a break of three eventually established itself with OUCC’s Matt Kerin making the selection. The three battled hard in the conditions to maintain their advantage, with the bunch only giving up the chase in the final minutes. Matt made a strong move at the bell but was chased down, eventually rolling home for 3rd. Meanwhile, Michael Knight managed to escape the bunch with a few laps to go and rode solo to take a strong 4th place.

We also had a number of riders in the 4th category race, several of whom were riding their first races and acquitted themselves admirably. Most notably George Edwards, who  is far from a newbie and was technically racing in Condors colours, took 2nd.