Tamara’s doubling down at Dalton Barracks

Tamara Davenne showed that it was no fluke when she won a bunch of races last year, and got her season off to a great start with two wins from two races at Dalton Barracks. She shares a few thoughts here! 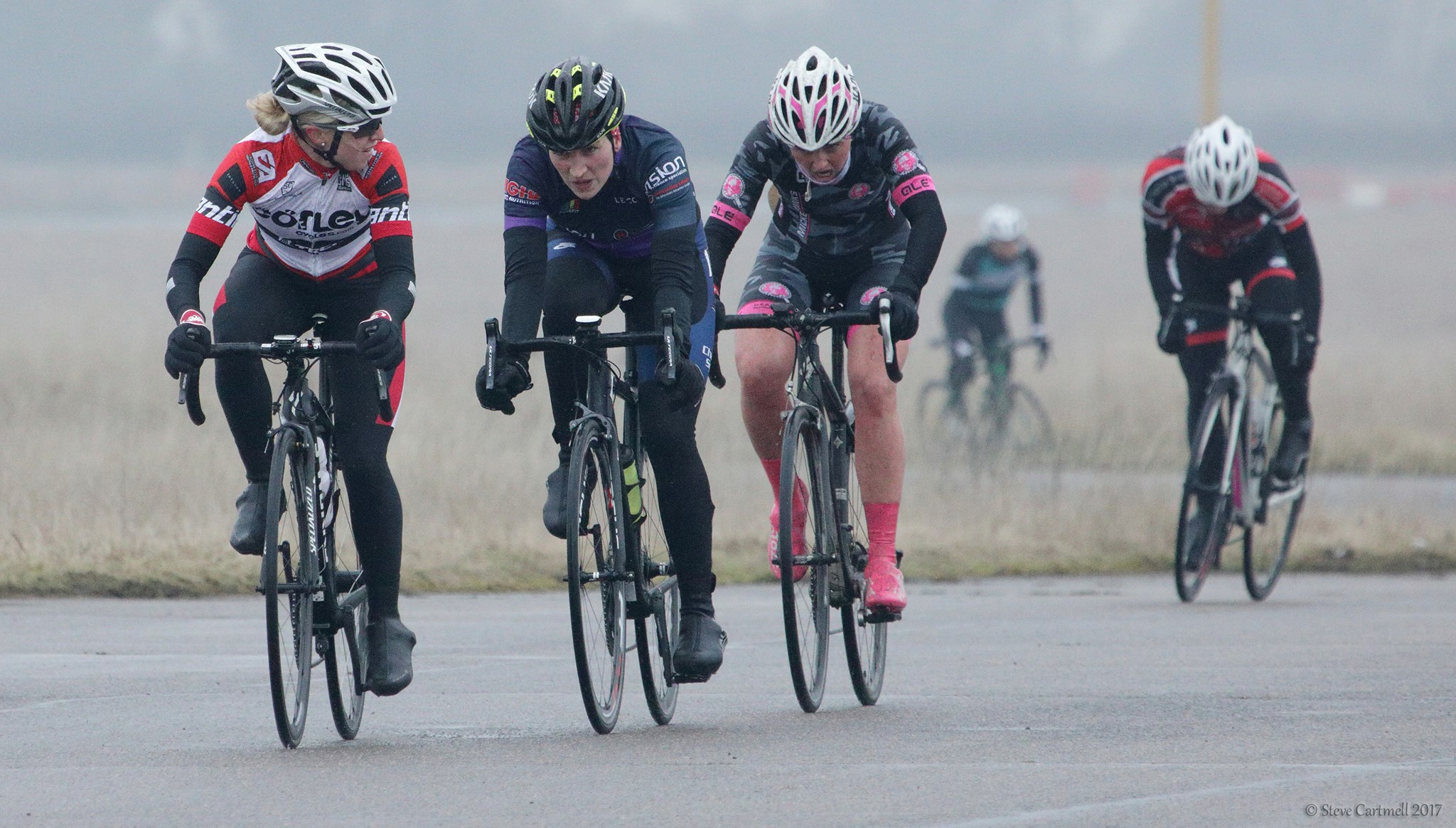 It was finally time to start racing, I couldn’t wait to race on my new racing bike, to wear my new colours and to race with my new teammates!

First race of the season was Saturday 4th of Feb, a nippy morning but fortunately the track was rather dry and the sun came out! We started with around 30 women on the line, a big field for a local race, and I could tell that everyone was super excited. The pace was high in the bunch from the start, thanks to my teammates being determined to keep it high. A few attacks and chases made the race entertaining, I put in a few moves to see how the bunch will react and spot the strong riders. My team, Vision Innovative Leisure RT, started the race with 4 girls: we had the numbers on the day so we tried to make the most of it. Our strategy was to keep the pace up and attack one after the other if legs allow it.

About 20 minutes in, when they brought back my teammate Tasha, it was my turn to launch a strong attack,. My teammates were right there and I knew they would help if they were not coming with me. A moment’s hesitation from the bunch, some blocking from my team mates, and a strong attack: that’s all you need to get away.

The rest of the race was extremely though, maintaining a TT pace for 30minutes, becoming more and more tired, but the cheering of people from the club, teammates, parents, or simply spectators, kept me going. I kept around 20sec on the bunch, my teammates did a great job helping to keep that gap. It was so hard to maintain that pace, the worse moment being when I looked down to realised that it has only be few minutes and I was already dying.

I think it’s this moment that defines if you will win or lose. Your strength of character, your confidence wilI make you choose the option “I can do it”. I know that I am not the only one having good legs out there, but the confidence of attacking, the mental strength of digging, all of this is experience and I think that’s what makes a difference. I have learned in the past few years to develop a positive thinking, I talk to myself in hard moments and that’s what keeps me going. I lost my dad from cancer few months ago, and this is what kept me going “if you think you are suffering, it’s nothing compare to what he has been through”. I felt exhausted at the end, I cried of exhaustion. I was really satisfied of having pushed my limits so hard and I realised my teammates took 2nd and 3rd so a great day for our team! This is an important thing for me: finishing having pushed as hard as I can! It seems like the training plan I have been following with Oxford University Cycling Club squad is paying off.

The second race of the season was the next Saturday. It was 1 degree and we had a tiny bit of snow… It was only me and Louise since our other teammates were off training in Spain. Louise was really ill so we had to adjust our plan for the day: she tried to survive in the bunch and I would see what I can do.

Having a look at the start sheet, I knew I had 2 people to watch out for. Steve’s precious advice and experience (our team mechanic) always help to decide who I need to look for. From that time, you can makes lots of plan but I never make too many: I need to have a feel, especially when it’s cold and wet your plans can change. I had decided on one thing: I won’t attack that early, last time was hell… Race starts, doesn’t take long to notice that there is a strong headwind on that section, and no one wants to be in the front (something else to consider when you break away solo, this headwind is killing you…. BUT it’s killing everyone else too). Pace lower than the previous week, from the cold and the wind I suspect… Few attacks, few chase, pace dropped on the headwind section… The pace dropped too much so I decided to attack to stimulate the bunch, I look back and someone was with me “we have a gap, let’s work together”. I look down, we were 17min in the race “crap, that’s early… but let’s go for it then”.

The advantage of going that early, is that everyone thinks it’s too early so they don’t chase: but hey guys I’m really going for it! I am in the front for a lap, she couldn’t take a turn – I was fine with her staying in my wheel but she was dropped. So it was just me…

The rest is last week scenario: pain, hold on, look back every corner to evaluate how much you have on the bunch. I lapped the bunch few laps before the end, but a group of 3-4 riders would have detached and was chasing me (with Karla Boddy and Lucy Austin, the 2 strong riders I was watching… they finished 3rd and 2nd!) I had around 20sec on them apparently. I had no clue what happened, the mens race split and it made it confusing to figure it out at 180bpm. When I got my licence back, I received a warning from the comissaire because “I took advantage when the mens bunch overtook” (it didn’t happen), no action was taken because the bunch chasing me did it too.

So my first two races of the season were good, good racing, good kit, great bike. Consistency of the training with the squad pays off. I am hoping to focus on my TT training to perform well at BUCS!

If I have a piece of advice to give to keen racers is positive thinking, find these moments, positive sentences that you tell to yourself when it gets hard. Decide I advance that if you attack if you are ready to commit to it. Watch out for strong people: they are the ones you want tired when you attack, or the wheel you want to be on in critical moment. Feel the race, have fun!

Massive thanks to the organisers Outdoor Traders Race Team for putting on the series, hoping to keep things up at the next few!

Photo credits – Steve Cartmell – can’t quite believe he stood out there in the freezing cold to get the pics!