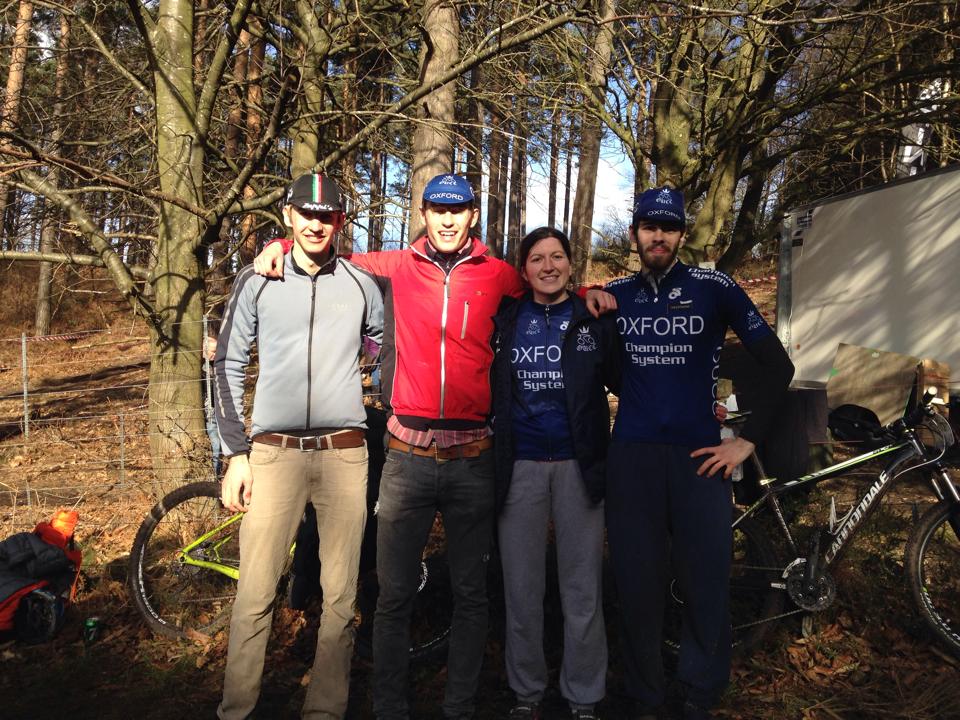 A few weeks ago we had our Varsity MTB match against Cambridge. We managed to defend our win from the year before so congratulations to all MTB riders who came along. Read moreÂ down below. 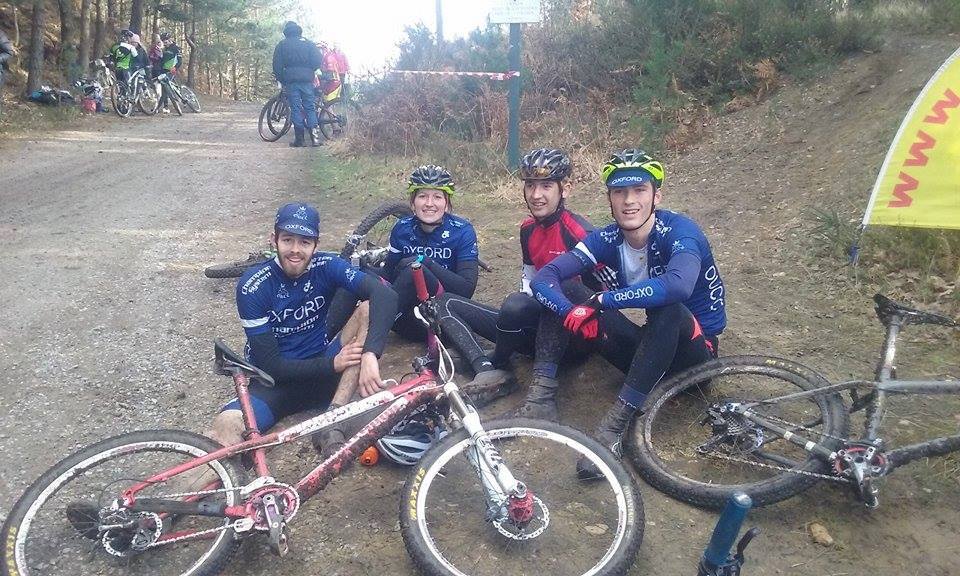 “Last Sunday, after apocalyptically poor conditions the day before, dawned clear and dry (up to a point). We loaded up and drove down the M4 to Crowthorne Wood, site of the 2016 varsity match, i.e. Gorrick Spring Series Rd1 â€œwith extrasâ€.

Those extras being myself, Will Wheeler, Tim Bevan, Tom Everitt & Sam Holder, led by OUCC prez and womensâ€™ captain Tamara Davenne, and our counterparts from the flat corner of the country; returning combatants Fin Allen & Matt Rodgers, plus some other enterprising young men (and unfortunately it was only men) theyâ€™d rounded up over the past year. I say extras because Gorrick run us a separate category, which is nice â€“ the smaller field makes attacking at the start more intimidating.

This I duly did, and managed to get to the first section of single track leading out the field. The next hour or so was fairly uneventful; after picking my way through the category in front (waving hello to Sam who was mixing it up in sport) I found some clear air and got into a decent rhythm. The course was fairly soft, a mix of fireroads and fresh loam singletrack, it had suffered the worst of the storm the day before, which meant carrying speed though the technical sections became both more difficult and more worthwhile.

About halfway around lap 3, I began to notice something a bit funny, but it took another few minutes to work out the problem â€“ my seat was working its way loose. Terrified of it falling off and having to ride 40 minutes out of the saddle, I cramped up (in style rather than physiologically) and limped round to the pits. After tightening it, insufficiently as it turns out, I headed out for the final lap. After five minutes, the issue returned. Not being able to sit properly began to take its toll and my legs began to go. The course, which had zipped by an hour earlier, became a struggle. Â About ten minutes from the end, I was caught by Will and Sam. The next sections were pretty grim but I hung on until the final climb, where I hooked up my wheel on a root, stalled, and watched Will blast past to reverse the result from last year.

It was still a good morning: finishing first, second and third (Tim) ensured us the team victory for a second year running, Tamara rode a strong race to win the female sport category (obviously) and after suffering catastrophic mechanical failure off the start, Tom hammered round to eventually catch the group with time to spare.”Â

“Lining up before the race, my

aim had been to podium in the hope that I might obtain a half blue. Knowing that Isaac and Will were much fitter than me, this left third place my only hope. As soon as the gun went off, I had cause for concern. Cambridge had fielded a strong team, and Tom

Simpson when off like a whippet. Tom and I fought for position throughout the first lap, until I fell off and he opened up a small gap. As time went on, my back began to tighten into an agonising knot and I miserably resigned myself to 4th place. Part way

through the third lap, just as I thought all hope was lost, I spotted a familiar rider on the horizon. All concerns about my back were forgotten and I put the hammer down, passing Tom, who muttered a deflated â€œoh shitâ€ as I went by â€“ I think he went a little

too hard out of the gate. Despite being on the verge of cramping for the last half of the 4th lap, I nursed myself home to a hard fought 3rd place, ecstatically flopping off my bike into a world of pain. Totally worth it.”

“Varsity MTB took place on the 7th February at Crowthorne woods near Bracknell as a sub-category of the Gorrick Spring Series Rd1. An early start was on the cards and in my 6am comatose (and maybe subconsciously arrogant?) state I forgot to pack the overall trophy that we had won last year. To avoid embarrassment the only remaining option was to apply raw watts and retain the title for Oxford.Â

When we arrived at the track it was a bright but crisp morning. Bleary eyes were soon cleared by the cold air, and after warm-up we signed on with plenty of time to spare for eyeing up our baby-blue opponents. In amongst the familiar faces from last year (Rodgers et al.) there were a couple of wild cards to spice things up. Everyone went hard off the start, so hard in fact that a loud bang echoed through the woods about ten seconds in, signifying the end of Tom Everitt’s chain’s short life (mad torque the only explanation). I hung onto Isaac’s wheel for a whole minute before watching him dance away into the distance, and set my sights on securing 2nd place. After a ten minute battle with Cambridge’s Tom Simpson I managed to open up a safe gap, then turned my attention to fatigue management and bonk avoidance. This continued for the second and third laps with no noteworthy events to report during either lap. Coming into the fourth and final lap I realised I had plenty left in the tank and put the hammer down. Picking my way through the “sport” category that had started just ahead of us I eventually started getting fleeting glimpses of the familiar blue and white jersey of Sam Holder, ex. mtb captain and myÂ predecessor, through the trees. Then to my surprise, on a long open section of the track, another familiar silhouette appeared on the horizon ahead. As the gap closed it became clear that I wasn’t just hallucinating and it was indeed Isaac, hindered by a broken seatpost inducing a semi-bonk on the final lap. Drawing into the final climb a wet snakey root caught Isaac’s tyre, and I found myself abandoning any sentiments ofÂ camaraderie or team playing, and nipping past to take the win by 20 seconds. Isaac and I then sat at the finish to watch Tim ride through to a back-breaking third place, ensuring utter domination of the Tabs.

A completely dark blue podium secured us the overall trophy for another year; the team score is the total time of the top three riders. Tamara smashed the sport female category as per to take the win, andÂ technically also a walkout victory over CambridgeÂ with a no-show from any female Tabs.”