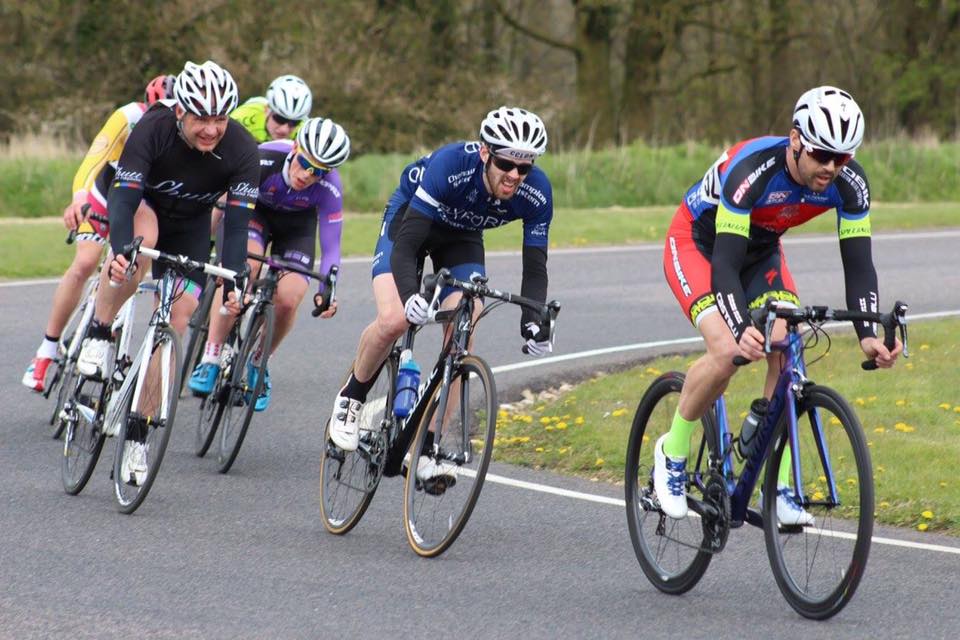 Itâ€™s been a busy week for OUCC, with many of our members buttoning down the hatches in the library studying for exams, a few managed to sneak out for some racing and riding over the weekend!
The biggest news for us was the squad we sent up to the Rockingham Forest Wheelers 2-day stage race in Leicestershire where the guys put in some awesome riding and came home with the KOM jersey, read more about it on the dedicated reportÂ here.
Closer to home Isaac Mundy had a great time showing his chops in the local criterium that was put on by the Cowley Road Condors on Sunday, read more about it below, but he rode strong to secure enough points to move up to second category, only 200 to go to be where he belongs!
Other than that our President was off enjoying some of the longer days by doing a round trip of the Isle of Wight, while Ed Barnard was making us all very jealous by riding around the South of France!
The weather is set to warm up a bit this week so hopefully more good times out on the bike awaits! We will be sending a few riders to the Bec CC hilly road race on Sunday, so watch this space!
OUCC

I headed up to Enstone on Sunday for the Condors & Mickey Cranks 2/3 crit, looking for 2 BC points to tick over into 2nd cat after missing out at the brutal Archer criterium last month.

Iâ€™d felt good during the week but come the morning I did feel a bit cbaâ€™d, Iâ€™ve found that when I really am just going for the points, racing is a bit dull. Riding out there was a strong tailwind, which was to prove decisive during the race.

A relatively small field took to the track and due to the blustery head-crosswind at 45Â° to the main straight, a split very quickly formed with those who were willing to chase the gaps down forming a tight group at the front while the rest of the field was decimated. This was Tim Allen (RP racing), Sam Calder (Beeline), Rob Ormond (Fast Test RT), Luis Galiano (himself), George Clark (Catford Equipe Banks), someone else and myself.

The next half an hour was enjoyable in a way, with every couple of laps bringing someone else smashing off the front to keep the group on their toes without seriously trying to get away. I began a pattern of hitting the front for the downwind section in order to keep myself out of trouble and have some fun building a gap through the tight corners, however this backfired miserably when I discovered the limit for the second hairpin. Itâ€™s 28mph. After bouncing off the ground I thought I didnâ€™t really feel like being dropped so spent two laps absolutely ruining myself in the wind getting back on.

5 laps later George, Tim and Sam attacked on top of each other and when Luis went around me to close the gap, I felt the creep of fatigue from chasing set in â€“ even if this group dropped me, weâ€™d got so far up the road from the dregs that I was pretty much guaranteed 7th. I dropped the wheel upwind and then had Rob sitting on, patiently waiting for me to chase, while expostulating that he couldnâ€™t do any work, he was done. When I made it very clear I wasnâ€™t going to go mad he started working and swiftly got across, taking the anonymous 6th member of the break with him, they then set themselves for a 6-up sprint while I rolled around the last 3 laps to clinch my 3 points and move up.