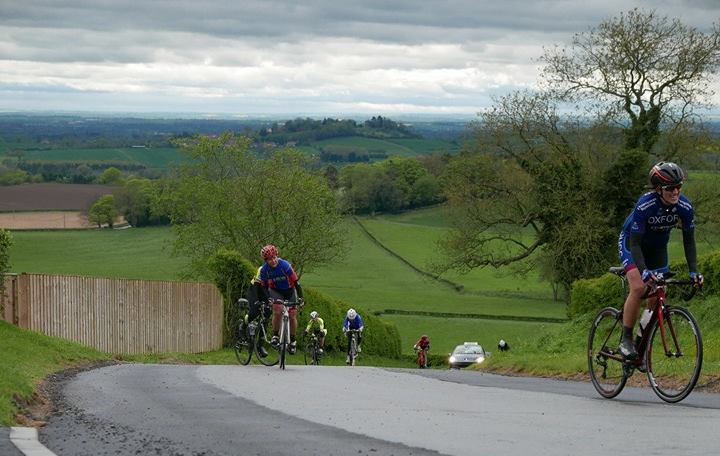 The women race took place in Brandsby last Saturday with 78km(6 laps). It rained the whole night before and the morning on our way there so Liv and I were prepared. Luckily it stopped raining when we started at 10.30am, but the wind was quite strong.

There was a section of the route with 15cm of water in the hollow of the road and the commissaries decided to neutralise this part of the race every lap. We started at a reasonable speed and as expected Hayley Simmonds (Cambridge) was taking the lead in the front, the pace stayed descent on the hills and within the first 2 laps the bunch split leaving 15-20 in the leading group. I did a lot of work with Hayley in the front, with a bunch of riders behind us refusing to take any turn in the front. We agreed that we should try to escape to avoid losing any more energy dragging all these wheelsuckers!

In the 3d lap they manage to clear the water from the road so the race wasnâ€™t neutralised on this bit, the road started to dry as well and conditions were easier. I did few attacks and the bunch was able to chase, one of them allowed me to create a descent gap but I realised that with 40km to go it will be hard to maintain that pace. I tried to do less work in the front in the last 2 laps but the pace dropped significantly and I had to sow down to <25km/h and make sign to force people to overtake me. The average speed of the bunch was around 35.5.km/h in the first 4 laps and dropped to <34.5kmp/h with less than 20km/h. I did few acceleration on the small hill section to make everyone tired for the last climb â€“ I was feeling good still and ready for the final climb.

The final climb was out of the lab, the last bit of the lap was a uphill section, I stayed on the wheel of this girl from Liverpool we then had a small downhill section before facing this horrendous climb with 800m at 9% grade. In the bottom, I was overtaken by these 2 girls from Sheffield and another one who sat in the bunch for the whole race, didnâ€™t do any work and waiting for this final climb (thatâ€™s disgusting!). I managed to stay in one of Sheffieldâ€™s wheel, but she struggled on the climb, started to zigzag and fell right in front of me! I avoided it but I had to stop and unclip â€“ this is where the nightmare start. I lost precious seconds trying to clip again and saw Heyley overtaking me â€“ few seconds later I managed to clip back in after few rotation with the foot on top of the pedal in the wrong orientation, starting again in the middle of the climb from speed 0 was though!

The 2d rider was overtaken by Hayley, she was breaking down, I manage to reduce the gap between both of us but not enough for a 3d place, I finished 4th â€“ I looked at my garmin: 84km, 2h27, 34.3km/h average speed and 723m total ascent. Liv finished 2d of her bunch and face the same problem: she and another rider were the only people taking turn in this bunch of 10 riders. Although women racing is more and more popular, itâ€™s a shame to observe such a defensive behaviour with people sitting down the whole race and waiting for a bunch sprint or the final climb.